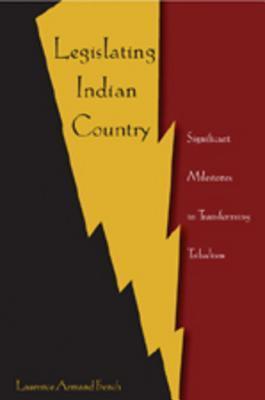 Subsequent sections detail a shift in policy from physical to cultural genocide: section three covers the legislation that set the stage for federally-controlled tribal administration, and the fourth section examines the 1950s attempt to dissolve tribes, forcing them into capitalist-based corporations with tribal members assigned stockholder status.

The final section identifies a middle ground between the strict federal oversight posited by Indian Reorganization and the harsh policies of termination and relocation.Although the days of overt genocide are over, a more subtle form of exploitation continues today, evidenced by the current controversies surrounding the mismanagement of the Individual Indian Trust Fund, and the deliberate exploitation of gaming tribes by lobbyists and politicians.

By providing insight into the history of this legislative trend, Legislating Indian Country points to new directions for the future of tribalism.