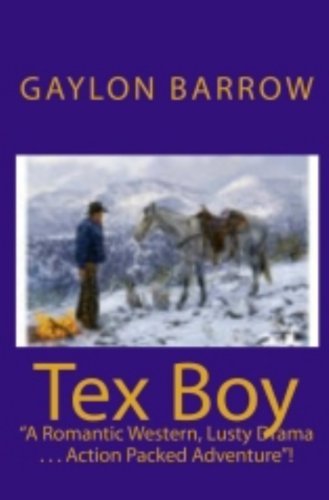 he said.Men gasped and moved hastily out of range, never doubting what would happen next. Tex himself knew—or thought he knew—and his hand was on his gun, ready to pull it and shoot- hungry—waiting for an excuse to fire.The Pilgrim had given a bellow that was no word at all, and whirled to come at Tex- met his eyes, wavered and hesitated, his gun in his hand and half-raised to fire.Tex, bent on giving the Pilgrim a fair chance, waited another second- waited and saw fear creep into the bold eyes of the Pilgrim- waited and saw the inward cringing of the man.

It was like striking a dog and waiting for the spring at your throat promised by his snarling defiance, and then seeing the fire go from his eyes as he grovels, cringingly confessing you his master, himself a cur.What had been hate in the eyes of Tex changed slowly to incredulous contempt. Aint that enough? he cried disgustedly. My God, aint yuh man enough—Have I got to take yuh by the ear and slit your gullet like they stick pigs—or else let yuh go? What are yuh, anyhow? Shall I give my gun to the bar-keep and go out where its dark?

Will yuh be scared to tackle me then? He laughed and watched the yellow terror creep over the face of the Pilgrim at the taunt. Whats wrong with your gun? Aint it working good to-night? Aint it loaded?Heavens and earth! What else have I got to do before youll come alive?

Youve been living on your rep as a bad man to monkey with, and pushing out your wishbone over it for quite a spell, now—why dont yuh get busy and collect another bunch uh admiration from these fellows? I aint no lightning-shot man! Papa Death dont roost on the end uh my six-gun—or I never suspicioned before that he did- but from the save-me-quick look on yuh, I believe yuhd faint plumb away if I let yuh take a look at the end uh my gun, with the butt-end toward yuh!Honest t God, Pilgrim, I wont try to get in ahead uh yuh!

I couldnt if I tried, because mines at m belt yet and I aint so swift. Come on! Please—purty please! Tex looked around the room and laughed. He pointed his finger mockingly Aint he a peach of a Bad Man, boys? Aint yuh proud uh his acquaintance? I reckon Ill have to turn my back before hell cut loose.

Yuh know, hes just aching t kill me—only he dont want me to know it when he does! Hes afraid he might hurt m feelings!He swung back to the Pilgrim, went close, and looked at him impertinently, his head on one side. He reached out deliberately with his hand, and the Pilgrim ducked and cringed away. Aw, look here! he whined. I aint done nothing to yuh, Tex!Texs hand dropped slowly and hung at his side. Yuh—damned—coward! he gritted. Yuh know yuh wouldnt get any more than an even break with me, and that aint enough for yuh. Youre afraid to take a chance.

Youre afraid—God! he cried suddenly, swept out of his mockery by the rage within. And I cant kill yuh! Yuh wont show nerve enough to give me a chance! Yuh wont even fight, will yuh?He leaned and struck the Pilgrim savagely. Get out uh my sight, then! Get out uh town! Get clean out uh the country! Get out among the coyotes—theyre nearer your breed than men! For every sentence there was a stinging blow&md